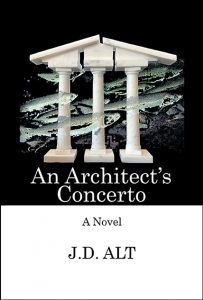 This is the story of how one man’s quest for a utopian architecture became his son’s quest for the love of a young woman haunted by an ecological disaster. It is a coming-of-age story, a love story, a treatise on the role of architecture in human affairs and, in the end, a dramatic confrontation with the forces of greed and corruption that undermine our prospects for a just and ecologically enlightened society. The theory of Enabling Structures, which the story dramatizes, has now become a central theme of my essays on macroeconomics and Modern Money Theory.

This novel was originally published in 2011 under the title “The Architect Who Couldn’t Sing.” The publisher (Dog Ear Press) went out of business and the digital publishing files for the manuscript were lost. In the process of reclaiming the manuscript from thumb-drive backups, I discovered the characters–and the story itself–had nuances I had not originally perceived or understood. Consequently, what began as a simple process of re-knitting the original manuscript back together became, instead, a full re-experiencing of the story–with numerous improvements and re-considerations along the way, including a more telling title. My hope is that now, retold and republished, this love-story of architecture can (with its new name) begin a new life.