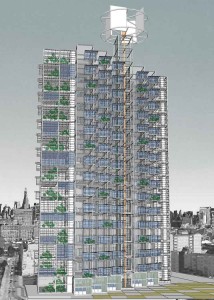 Soho is my best example yet of an architectural “enabling structure” that would be built with the operations of modern fiat money owned collectively by a National Housing Co-op and “built-out” with privately owned and financed autonomous dwelling projects. It was my entry in a national design competition for “The Residential Tower of the Future.”When I first read about the competition I decided to ignore it because I had spent so much time developing arguments (An Architect’s Concerto; The Horizontal Skyscraper) about why architecture should be developed horizontally rather than vertically. I did not like vertical towers on principle: They were invented by the Stalin authoritarians to house the masses of workers controlled by the Russian state. Then they were adapted by the western capitalist rentiers (otherwise known as real-estate developers) as the ideal way to leverage and concentrate wealth. Then vertical towers took over the third world in a bizarre collaboration between authoritarianism, capitalism, and charade democracy which continues to this day. For me architectural towers represented and embodied, in other words, much of what had gone wrong with the human enterprise.

Then I realized I might be missing an opportunity to make a point about Enabling Structures and Modern Money Theory. Even more interesting, I realized that horizontal and vertical development were not necessarily incompatible. It might be possible, I thought, to achieve the benefits of horizontal development going vertically, and that would be worth exploring—especially since the modern world continues, so insistently, to be enamored with building and living in vertical towers. So, I decided to tip my horizontal skyscraper back up in the sky and see what could be done.

Soho in the Sky was inspired by the romantic notion of moving into an empty loft space in the Soho district of New York City, building it out in an eclectic artsy fashion, and living the high-artisan society life that’s only possible in places like the Big Apple. While in college, I’d once spent a weekend with friends of a friend who lived in just such a loft-space, and I was greatly impressed by the vitality of it all. I was especially taken with the idea that within the confines of the brick walls of 19th century manufacturing loft—surrounded by galleries, music bistros, and avant-garde food venues—you could, with creative impunity and without the supervision of any local building inspector, build the equivalent of my “house-in-the-woods.” 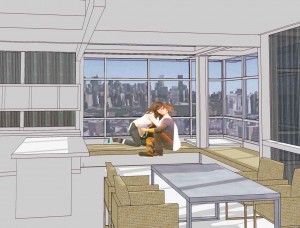 Empty loft spaces in Soho are hard to come by these days and, no doubt, rather pricey. Soho in the Sky was an idea about changing that, making the experience of living and creating architecture in urban contexts more accessible to everyday people and small design-builders. The basic unit of the tower is a prefabricated two-story “loft box” which has, as a main dramatic opportunity, a corner balcony outcrop which can be interpreted as either an indoor or outdoor space. The structure of the loft-box makes it easy to stick-build second floor platforms and connect plumbing and electrical runs from any location to the utility core. In other words, the empty loft-box is a blank canvas for creative interior architecture. The empty loft-boxes are stacked to create the tower. 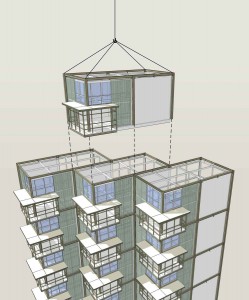 After they are stacked into the tower, each individual loft-box is autonomously developed and completed into a dwelling (or into two dwelling units, an upper and lower.) 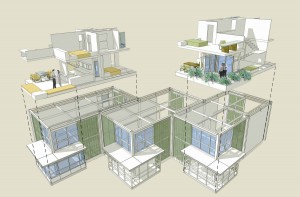 Each “floor” of the tower is, in fact, a short horizontal pedestrian street bounded on each side by the two story loft-boxes. At one end of the street are vertical elevator towers—including a large, construction elevator for bringing building materials up to each level. At the other end of the street is an open air community space. Each “street” in the tower is intended to function as a Cohousing Community: the community space is shared by the 11-22 family units on each street. This space can be developed and used as the community chooses—gardens, “outdoor” cooking and eating, playground space, mini-day care—whatever the group can agree to. It can be partially or fully closed in, or left completely open to the air.

The tower is built upon, and around, what is essentially a micro-grid power plant and waste-water treatment/recycling facility. Power is generated by a vertical axis wind turbine which is integral with the vertical structure, below grade fuel cell generators, and methane generators which convert the sewage and organic waste produced in the tower. Grey water is collected, treated, and made available to each community space for irrigation. The ground level stories contain services—dry-cleaning, day-care, mini-mart, etc. 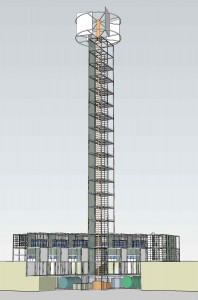 These are all interesting features but, for me, the most important aspect of Soho in the Sky is that the tower of empty loft-boxes is to be built as a collective infrastructure. It is to be paid for and maintained with the operations of modern fiat money―like a bridge or a highway—and it is owned collectively by a “National Housing Co-op.”

The final build-out of each individual loft box, on the other hand, is privately managed and owned―and is paid for with with dollars (or loan dollars) from the private sector economy. While each individual dwelling unit has a perpetual right to occupy its particular loft-box in the tower, it does not “own” a piece of the the tower or the loft-box itself. (As noted, these are owned by the National Co-op.) 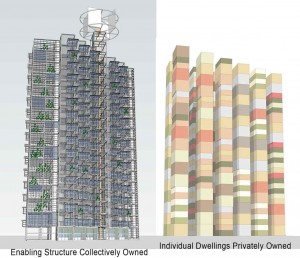 As a result of this ownership structure, the cost of the “enabling” architecture (the infrastructure of the tower of loft-boxes) is perpetually excluded from the cost of each individual dwelling unit. The housing thus produced is considerably more “affordable” than what is produced by conventional real-estate development models.