HOUSEEDs are one concept for an architectural “enabling structure.” Their purpose is to make it faster and easier to build creative, affordable dwellings. The background of the strategy, for me, goes back a long way: The summer before I started architecture school at North Carolina State University, fresh out of the Navy and full of optimism, I decided to build a small house-in-the-woods to live in while I attended school. I had saved, from the Navy, a $10,000 building budget. I figured it would be enough if I did the work myself.

I met a farmer outside of Raleigh who agreed to sell me two acres of land in return for a modest monthly payment. I bought an old Dodge pickup at a State vehicle auction, a used radial arm saw, an electric cement mixer, a shovel and a hammer. I lived in a tent next to my building site. I dug the footings by hand. I taught myself to lay concrete block. I made the window frames and sashes with the radial arm saw. I found a big industrial steel window frame that had been discarded in the local landfill. A friend helped me frame the rafters in one day, and we covered them with galvanized metal barn roofing the next.

By the end of the summer I had “closed-in” and weatherized  a simple and modest building shell–a single, large space with a loft over one end. I was surprised by how quickly, and relatively easily, it had come together. I moved in just before school began, and looked forward to “finishing” the interior―the plumbing, the electrical, the mechanical, the cabinetry―in my spare time between architecture classes.

Two years later, my kitchen “counters” were still 2X10 boards resting on stacks of leftover concrete blocks, my electricity still came from a power cord to the temporary service pole, my kitchen sink was a Tupperware tub with a garden hose, my cook-top was a kerosene camp stove, my toilet was a tented outhouse, and I showered at the University gym. In short, I had made a startling discovery:

Building the shell of a house is relatively easy. What is difficult, time-consuming, and technically demanding is everything that goes inside the shell!

I pondered this discovery a good bit as I plugged away at trying to finish my kitchen, bath, laundry and electrical system. And suddenly, just before the beginning of my last year in architecture school, I had an insight: What if, when I had started my project, I’d been able to build my shell around a compact, prefabricated “core” that contained―already finished and ready to use―a kitchen, bath, laundry and basic mechanical system? If that had been the case, I realized, my house-in-the-woods would have been essentially finished at the end of that first summer!

The idea was not to mass-produce whole dwellings, but only a compact, central core—what I called a house “seed”—that would make it easy for semi-skilled builders, by constructing a shell around the seed, to complete a finished dwelling in a relatively short period of time. Most important (from my perspective) was the fact that, even though each house-building project began with the same “seed,” every house could be different; every house could be the creative expression of a particular builder. This resolved what, for me, had always been the major problem with prefabricated housing concepts.

After architecture school, I sold my now completed little house (for a surprising profit!) and quickly got sidetracked pursuing a career as an “architect.” I took 30 years to find a reason to return to the HOUSEED concept–to try to see how it could actually work. My daughter, Megan, had just graduated from the Northwest School of Wooden Boat-building and (I strategically thought) if I could get her to build a HOUSEED instead of a boat—and then a house around the HOUSEED—she might avoid sailing off never to be seen again.

We acquired a piece of land in Port Townsend, Washington (where she was living) and commenced an experimental project to build a little complex of two adjacent houses, each of which was unique in itself, but which used the same HOUSEED core. We called them the “Potager Houses,” envisioning them as a kind of mini-farmstead on the edge of town. 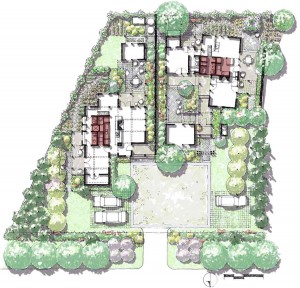 It was, as they say, a learning experience. What we learned was that the HOUSEED concept requires overcoming three major challenges:

The first HOUSEED we built was too big, heavy and difficult to transport. This was partially because it contained all the big appliances. (We realized later the refrigerator and washer/dryer could easily be installed after the SEED was placed on the site.) But it was also due to the fact that the design included partial floor spaces—and consequently floor and ceiling finishes—in the kitchen and bathroom compartments.

The partial floor spaces of our first module created a bigger problem than just increasing the size and weight of the SEED. When we built the finished kitchen and bath spaces around the core module, we discovered we had to match the floor and ceiling finishes of the SEED (probably the most “wow, why didn’t I see that?” surprise of the project!) We realized the HOUSEED itself needed to have zero floor space—a parameter which drove the final design we came up with which consists of “function” ports that open out into a space. 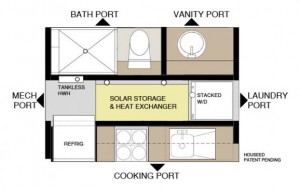 Another challenge (which any architect worth his salt should have anticipated) was the local building inspector. Our first seed, of course, contained all the finished electrical wiring and plumbing piping (that was part of the whole idea!). Much of this, however, was hidden behind finishes and couldn’t be inspected. Furthermore, the electrician who was hired to wire the house we built around the HOUSEED wouldn’t connect to or vouch for the wiring that was in the SEED itself, since he hadn’t done the wiring and couldn’t see it. This oversight required us to dismantle and rebuilt big parts of the SEED after it had be placed at the site. 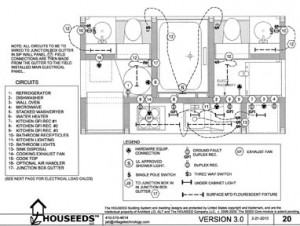 In our second prototype, we tried to overcome the “inspections problem” by building the HOUSEED as a manufactured housing module which was inspected by the State in the “factory” and, therefore, didn’t need to be worried about by the local building inspector after it was delivered to the site. We still had the same problem with the electrician however, since wiring runs in the site-built shell had to be integrated with the SEED.

We solved this problem in our final design by creating a “Mechanical Port” just big enough for an electrician (or an inspector) to get into, and which provided access to the backside of all the other functions—including their electric boxes—enabling the electrician to wire the SEED and the site-built shell at the same time. All the plumbing was visible and accessible from within this “Mechanical Port” as well. 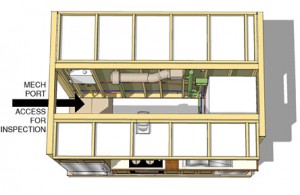 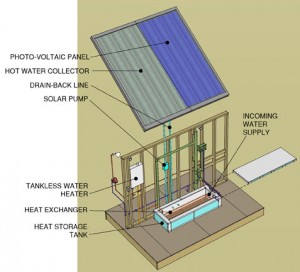 And, finally, we made the strategic decision that all the cabinetry, hardware, and appliance components would be off-the-shelf products from IKEA. The thinking here was three-fold: First, the stylish economy of IKEA products fit well with the central idea of the HOUSEED itself: building a dwelling economically but creatively. Second, since the SEED only provided one “face” of a functional space (e.g. kitchen, bath, laundry) the other faces could logically be completed with the same or compatible systems locally available from IKEA. Finally, using IKEA as a multi-state “parts warehouse” would enable the HOUSEEDS to be built by small, local fabricators all across the country.

We planned to use the capital regained by selling our first two experimental houses to finance our own small fabrication operation and build two more dwellings using the “new and improved” HOUSEED design. Unfortunately, this was in late 2009. Unbeknownst to us, as we put the Potager Houses on the market, and started fitting out our new fabrication shop, the U.S. housing market had, for all practical purposes, ceased to exist. No one was building or buying houses at all–while the Federal Reserve banking system was dashing to to save everyone except the families who “owned” and were cheated by the subprime mortgages that had brought the banking system’s gambling casino to its knees.

Megan ended up moving to Asheville, North Carolina where she subsequently built, and operates today, one of the first American sake breweries (Ben’s Tune-Up). I retired to my study and wrote the novel that became “An Architect’s Concerto”–a fictitious imagining of what HOUSEEDS might have become, and what they might have meant, had we been able to move forward. Then I began researching and writing about macroeconomics and Modern Money Theory. The challenge, I discovered, was not architectural design, but financial accounting–something I’d never–ever–in my wildest imaginations, considered thinking about.

But I still have in my mind the insistent idea that HOUSEEDS, as an enabling structure, have a useful mission in the world–a belief they make sense in a fundamental way. I still think about and tinker with perfecting the design and application of them. Soon, I hope, another iteration will come along and, maybe, find its way into reality.