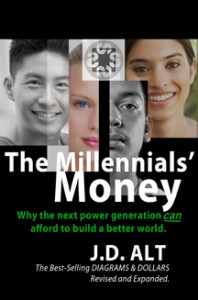 This book is currently out-of-print. The explanations of MMT have been revised and updated in my most recent book Paying Ourselves to Save the Planet–A Layman’s Explanation of Modern Money Theory. The video and slide show associated with The Millennials’ Money, however, are still useful–and are being used–as educating tools around the world, with some caveats. Here is the preface for a privately issued version in Switzerland:

Preface to the University of Lausanne version of The Millennials’ Money

This book, written nearly five years ago, is still a valid concept explanation of modern fiat money—with one exception, which I would like to take this opportunity to set aright:

The explanation of treasury bonds (beginning on page 19) is incomplete and misleading. This is partly due to my efforts to “simplify” things to avoid getting lost in the weeds of complexity that quickly grow in the close examination of any of these topics—but it is also due to my own incomplete understanding at the time of writing. What is missing is the fact that the dollars which are removed from the P.S. pot—and placed in the “Treasury Bond Account Chamber”—are then spent by the U.S. Treasury back into the P.S. pot to buy goods and services authorized by Congress. The idea, then, that these dollars are “drained” from the purchasing power in the P.S. pot is incorrect. In reality, treasury bonds are the vehicle the federal government uses for its “deficit spending” (spending over and above what it collects in taxes)—and what is important to understand is why the treasury bonds do not constitute “borrowing” which creates a “national debt” that must be repaid to somebody in the future.

A much better and more useful explanation of the operations of treasury bonds is given in my latest book “Paying Ourselves to Save the Planet.” This is true, as well, with the explanation here of “bank money”: what is presented (on pages 17 & 18) is a very cursory sketch which, really, is not that useful—while Paying Ourselves to Save the Planet, I think, develops a very complete picture.

Despite these shortcomings, I believe The Millennials’ Money still stands as a valid conceptual framework for the operations of modern fiat money and, more important, the kind of opportunities it creates for today’s society.

Here is the video:

The diagrams and basic structure of the video are available in a self-explanatory slide presentation. The presentation, and the graphic diagrams it contains, have been licensed to the Creative Commons as follows:

This license allows anybody to use, remix, tweak, translate and build upon the information in the slide-show, as long as they give credit, and as long as they license their new creations under the same Creative Commons terms. I encourage anyone who is interested to download the slide-show and use it, however they choose, to begin reaching out to and informing their own community. Modern fiat money, once it becomes a “visible reality” for more and more people, can’t help but become a force for positive change in our political discourse and collective future.